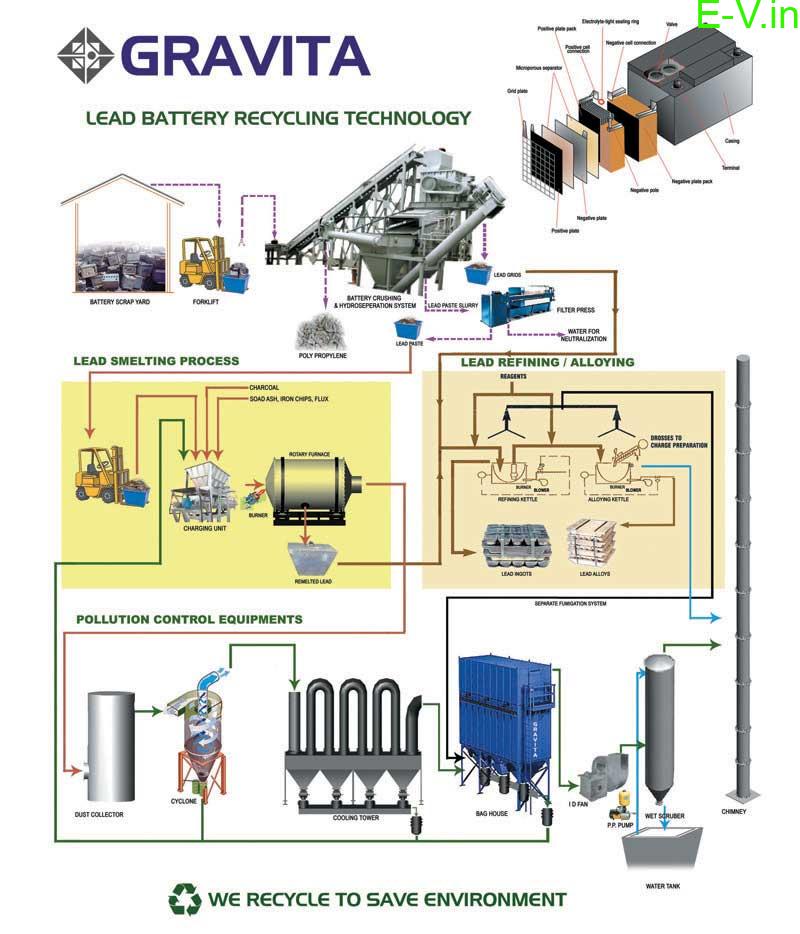 Battery recycling is not only important to save the environment from its disposals but it is also necessary to collect the precious metals comprising the batteries that must not be lost forever. EV batteries are not yet recycled at scale. Industrial recycling of lithium-ion batteries is done mainly in the European Union and China. The EV battery recycling market is still in its early stage.

At present, the company’s 87% of business is from recycling lead batteries and the rest is from other segments such as plastic and aluminium recycling.

In 2018 the Gravita has signed a contract with Amara Raja Batteries Limited for Lead Acid Battery Scrap Collection and Recycling arrangements. Under this contract, Gravita shall collect and purchase Lead Acid Battery scrap from designated locations of Amara Raja.

Gravita targets a supply of approx. 8000 MT of Lead to Amara Raja under the said contract which will help the company to strengthen its top line in FY 2018‐19 coupled with cost-effective recycling and long term business association with Amara Raja.

According to the International Energy Agency, 100-120 GWh of electric vehicle batteries will be retired by 2030, a volume roughly equivalent to current annual battery production. The spent batteries can be channelled to second-use or recycling with the aid of policies that help to steer these markets towards sustainable end-of-life practices, the IEA said.

The company CEO Yogesh Malhotra said, “We have tie-ups with major battery companies including Amara Raja Batteries and HBL Power. Now, we are sourcing increased raw material domestically. Currently, organised recyclers in India are recycling 40-50 per cent of the domestic scrap and this is expected to increase to 75-80 per cent over the next three years.”

“We already have recycling facilities in Jaipur, Jammu, Gandhidham and Chittoor in Andhra Pradesh. After the establishment of this plant, imported raw material will be recycled in Mundra and will be exported back from there,” Malhotra said. “Scrap from Africa, which was earlier imported to India, will now be consumed by our four African recycling facilities in Ghana, Tanzania, Senegal and Mozambique, resulting in further savings in logistic costs and reduction of the working capital cycle.”

Gravita India is setting up a recycling plant in Mundra in Gujarat, which will start its operation in August 2021. The plant will look after the works of battery recycling such as Smelting and refinery.