Electric vehicles are making a huge impact by keeping the environment safe and pollution free. It’s different when comparing it to the other petrol and diesel vehicles, as the design of the vehicles make them look cooler and also attracts the non-vehicle lovers. Electric Vehicles entered into formula one race track with the NISSAN Leaf Nismo Rc.

Formula 1 has introduced all the racing cars from fuel to electric. We have seen electric cars moving on roads, it was all possible to move on racing tracks too. Racing had been done on all new Nissan’s LEAF NISMO RC (electric car). In the fifth season racing had been done fast, longer and different from the previous car race.

The formula E car with the uplift in the performance and upgraded power. Earlier the electric vehicles were costlier and not usable by the consumers easily but the cost had been reduced so that it will be available to the consumers.
The modified body style and light-weighted structure of Nissan Leaf Nismo RC electric cars made participated in the formula.

Nissan introduced its Leaf (Venucia e30), electric car in Japan and United States in 2010 and won green card award. Later in 2011it introduced in European and Canada countries. Due to the increased prices it was unused by the consumers.

Nissan is the first carmaker and the leader across the globe in electric car, which has sold 365,000 Nissan Leaf vehicles. Formula E cars have more power, well designed and ecofriendly to use.

Nissan Leaf holds the battery capacity of 24kWh electric battery in which 21.3 kWh is usable up to 124 miles per charge depending on the model and usage.

Nissan introduced its LEAF NISMO RC, electric racing car restyled the model, and it has two electric motors with zero emission power. The car has an advanced battery facility which is making it the best-selling electric car.
Nissan will introduce new six LEAF NISMO RC electric cars for its consumers. The car consists of two electric motors on the opposite ends of chassis, which produces 240 kW and 640 Nm torque to wheels. 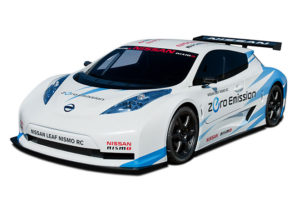 • It has lightweight components and completely carbon-fibre racing monocoque shape.
• Allows tip scales at 1,220 kilograms.
• It has 50% fast performance of 0-100 kph in 3.4 seconds comparing to the previous model.

For street racing championship Nissan in its fifth season made a debut for all the electric cars in December in the 12 major cities across the world.