The Indian government has set a target to make India a hub for electric vehicles. It had laid out electrification of vehicles plan through a National Electric Mobility Mission Plan (NEMMP) 2020. To motivate and encourage the adoption of electric vehicles in the country it has also started providing incentives or subsidies to the EV buyers and manufacturers under the FAME (Faster Adoption and Manufacturing of Electric Vehicles) scheme. Let us know about India’s EV adoption in detail.

Adoption of electric vehicles will not only reduce the pollution levels and makes the air quality good by zero emissions but it does also solves the other major issues of importing oils (fuels), rising petrol and diesel prices. Electric vehicles are one of the solutions to make the environment green and sustainable.

India is said to have the 50 most populous cities in the world. Every year air pollution is rising, India ranks at 3rd position in terms of causing air pollution contributing 6.3% in 2018 whereas China 4.7% and the US by 2.5%.

According to the World Health Organisation (WHO), every nine out of ten people breathe polluted air which results in the death of 7 million people every year by suffering from stroke, lung cancer, and heart disease.

So vehicular pollution is also one of the other pollutants in India. By the use and adoption of electric vehicles in increased ways, reduces CO2 emissions in the air and sound pollution compared to conventional vehicles.

Centre for Research on Energy and Clean Air (CREA)

We have witnessed a drastic change in the atmosphere, environment last year during the global coronavirus pandemic. After 40 years, the C02 emission was reduced for the first time according to a Centre for Research on Energy and Clean Air (CREA) for Carbon Brief.

As there was a lockdown and economic slowdown the Emissions levels in India fell down by around 15% in March, and about 30% in April. Not only this there was also the downfall of crude oil prices.

When we are talking about the pollution levels, the cities were witnessing much lower levels of particulate matter (PM 2.5) and nitrogen dioxide, which is released by vehicles and power plants.

COVID-19 lockdown has also measured the impact on oil consumption which fell 18% in March 2020 compared to the previous year. This was the result of all the conventional engine vehicles were not running on roads making less or no C02 emissions in the air.

EV policies in India helping in the adoption of electric vehicles

According to the data acquired from the Road Transport Authority (RTA), there is an increase in the number of sales and registrations of EVs within the GHMC limits. Under the Telangana EV policy, the EV owners have been benefited incentives from worth Rs 39 lakh.

Before the launch of the EV policy in the State, there were only 25 electric vehicles in GHMC limits until 2017. Now the number has increased to 5,000. However the sales of vehicles got affected due to the Coronavirus pandemic, but still, 1,360 electric vehicles were sold.

With this, we can see that EV policy and incentives provided by the government are somewhere or the other is helping in the adoption of electric vehicles. However, in some states, it is not working as it was meant to be.

However, with the above numbers, we can notice that every year we are witnessing some growth in the adoption of electric vehicles in every state and cities. By 2030, the government aims to make India a 100-per cent electric-vehicle nation.

Not only States, but the electric vehicles manufacturers are also contributing to improving the quality of air in the country.

“This figure does not include e-rickshaws which is still largely with the unorganized sector with a reported sale of around 90,000 units. The corresponding figures of the e-rickshaws sold in the previous year have not been documented,” SMEV said. The growth of electric vehicles sales in India driven by the electric two-wheelers segment.

“In the E2Ws sold in FY2019-20, 97 per cents were electric scooters and a very small volume of motorcycles and electric cycles filled the rest of 3 per cent. Low-speed scooters that go at a max speed of 25km/hr and do not need registration with the transport authorities constituted a whopping 90 per cent of all the E2Ws sold,” it added.

Electric vehicles sales globally have reportedly recorded a growth of 39 per cent, 3.1 million units and by 2028 the sales will reach 30 million in February 2021.

Amidst the COVID-19 lockdowns and restrictions

Amidst the COVID-19 lockdowns and restrictions, the automotive industry has affected badly in the first half of 2020 till the end of 2020. The car sales fell by 14 per cent in 2020 coming in at 66.5 million vehicles, but at 3.1 million units the share of EVs sold in the total passenger car market grew to 4.5 per cent.

Amidst a decline in the sales of the passenger car market in 2020, Electric Vehicles (EVs) have shown signs of growth. The global sales of EVs in 2020 increased by 39 per cent year on year to 3.1 million units, where the total passenger car market declined 14 per cent. Research firm Canalys forecasts the number to climb in the coming years with 30 million EVs to be sold in 2028. EVs are also expected to represent nearly half of all passenger cars sold globally by 2030.

But at 3.1 million units, the share of EVs sold in the total passenger car market grew to 4.5 per cent, a landmark year for electric vehicles. “In a tough 2020 for the automotive industry, the strong demand for EVs has been a real bright spot. This will continue around the world in 2021 and beyond, despite the economically adverse conditions.” It is expected that electric car sales to reach 7% worldwide in 2021.

The NITI Aayog (a policy think tank of the Government of India) has drafted a proposal that will help the government to encourage the sales of electric vehicles in India and cut down the oil consumption initially. It created a view that the wide adoption of electric vehicles will allow India to cut as much as $40 billion on oil import bills by 2030.

Coming again to the pollution and air quality, in 2019, the Delhites were struggling to breathe as the air is covered with thick smog and it literally becomes a gas chamber. The air pollution in Delhi had reached the hazardous level, above 400 as per the Air Quality Index (AQI).

The city’s 30 flights were diverted for low visibility, schools are shut under a public health emergency and construction activities are banned. Supreme Court of India prohibited the bursting of crackers after Diwali and cars with odd or even number plates are only allowed to drive on given days. But these are just temporary solutions that the government is finding to shut the voices of the people.

For example, if we take an example of a foreign country such as Delhi (a census-designated place in Merced County in the U.S. state of California.). The air quality is showing Good. 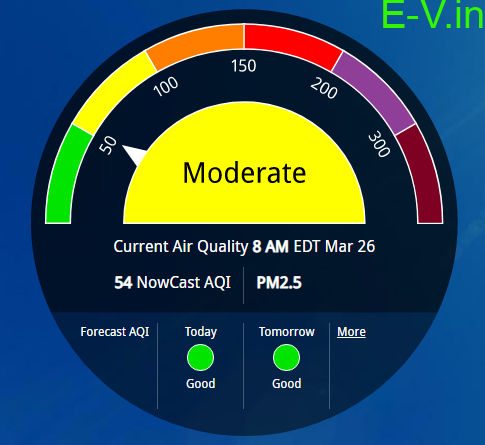 Whereas, if we see India’s city Hyderabad’s air quality level, it is showing unhealthy. 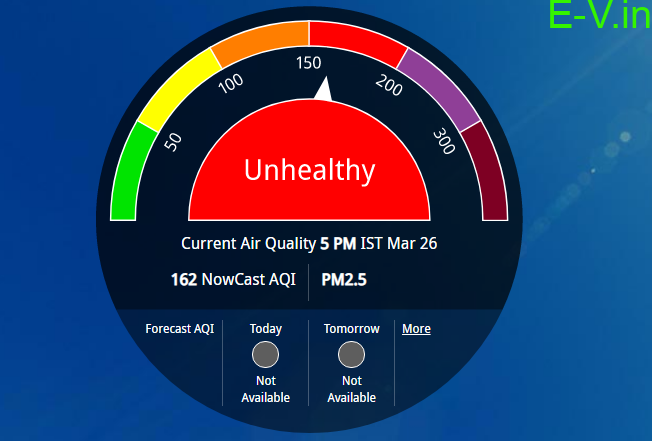 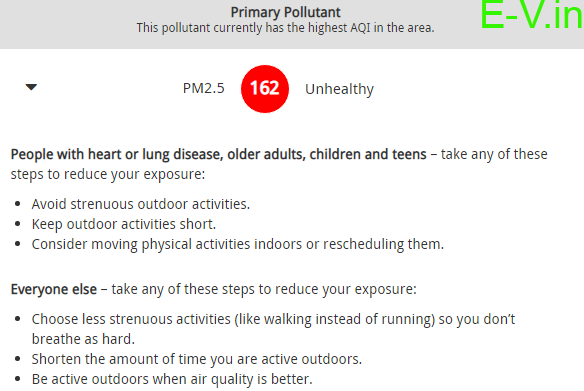