is built by Vikram Mishra, Arnab Banerji and Ganesh Mishra. 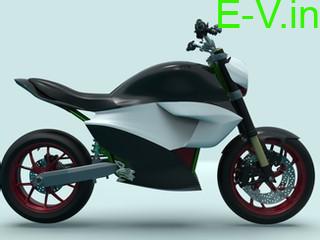 is been built in 14 months. The design of this motorcycle looks like a racer bike as it has a bulky fuel tank but it didn’t contain any fuel in that as electric vehicles don’t need fuel to run and is powered by an electric powertrain.

appearance comes with a dual paint and upper part of the bike is in matte green. It has got a long brown seat and the lower part of the bike is painted in glossy colour which is giving a stunning look to the bike. It has alloy wheels in green colour and the bike’s other elements such as frame and other bits are also green in colour.

has some key features such as a circular headlamp that comes with LED elements and lighting. It helps in giving the bike a retro cafe racer look.

It has LED indicators and LED brake light. It gets an attractive looking swingarm with a chain drive and has a single-piece handlebar instead of clip-on handlebars. It has disc brakes at front and rear. It has suspension forks in the front and a mono-shock at the rear.

The technical specifications of the M2 electric bike are it has a 1430mm wheelbase, seat height is 850 mm, ground clearance is 200 mm. Its suspension travel is 150 mm front and in rear 170 mm. Its rake angle is 20 degrees.

While we look for its performance its rated power is 18kW, max power 24kW and max torque is 64 Nm and its top speed is 110 kmph and provides a range of 180 km. It comes with a 10 kWh battery with 72V voltage with a peak power of 400A. It has an axial flux brushed DC motor and has a passive air cooling system.

The electric bike weighs 196 kgs and still in the prototype stage and further improvements will be made by the team. The 4rge has chosen for more classic and retro design which attracts more to the audience especially the youth.