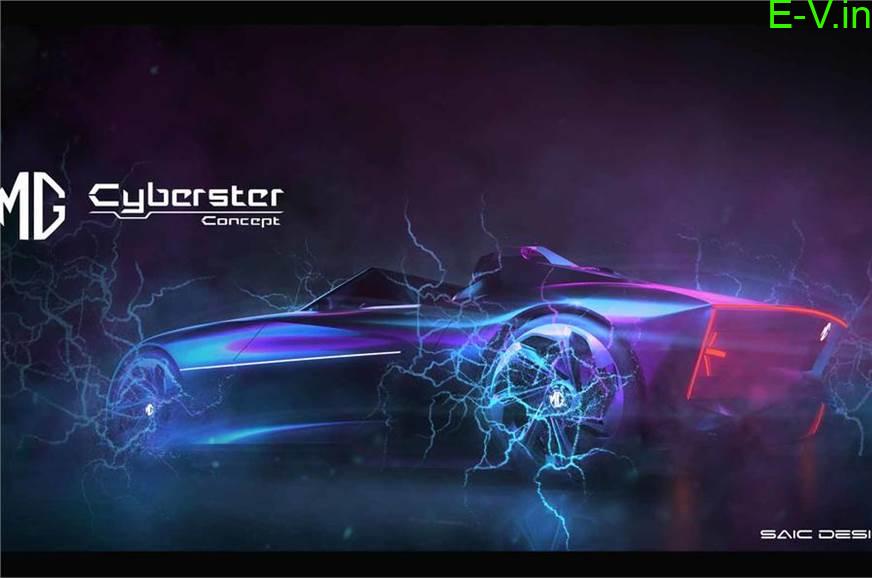 MG Motor has released its upcoming all new-electric two-seat roadster ‘Cyberster’ sports car. The MG Cyberster concept will be an electric two-door roadster that we can see in the rendering images. The artistic rendering is released by SIAC shows that the Cyberster will feature a long bonnet, two-door, a convertible roof and a sharp rear-end design.

By the images we can suggest it that it would be an electric sportscar but officially we didn’t get any information from the company. But it is reported that it will get a 5G connectivity and Level 3 autonomous drive technology. The Cyberster features illuminated MG badges, sleek LED tail lamps and in front we can see a completely sporty look in the image.

In 2017, the MG Motor showcased a MG E-Motion, a four-seater all-electric sports coupe that was suppose to go into production this year. However, the Cyberster is quite different from that concept.

The new sports car will be a pure two-seater roadster with an open or convertible top like traditional sportscars. It gets oval shaped headlamps with LED DRLs, long hood and a illuminated hood logo.

At this stage, discussing its technical terms is too early but we can expect that its electric powertrain will be capable of giving 500 km range and 0-100 km/h in 4 seconds.

Recently MG Motor announced that it is planning to expand its electric vehicles lineup in the Indian market. A British car manufacturer has already launched its first electric car in India, MG ZS EV. MG Motor India, Gaurav Gupta, Chief Commercial Officer has revealed that the company is considering “cost-effective EV” that will be priced under Rs 10 lakh.

0 0 0
Previous : Tata Hornbill Electric micro to be the most affordable SUV
Next : COVID-19: India is breathing fresh air after 40 years
K. Nandini Tornekar