The Gugu The motorcycle SUV is the fastest, quickest adventure motorcycle on the road with 100 kmph top cruising speed, electronically limited. The 5.7 s from 0-60 mph and with a mile range of 100+ mi. The Gugu, The R-Series SUV Electric Motorcycle is the best suited if you travel.

Guhan was very much interested in electric vehicles since he was a kid. In his second year of engineering, he and his friends watched a video of Tesla and were very much inspired to make an electric car but their excitement went down as they came to a realization that it will cost them much.

So they got a piece of advice to make an electric motorcycle. In 2017 they received a seed funding from Sundarson Paul for $500,000.After that Guhan dropped out of the college and with co-founder Kannan set up Gugu Energy.

Later they were able to collect $2.5 lakh. For the series A-funding, the team visited a few odd investors. At present they are a team of 14 people including senior management from different auto OEMs.

The Gugu Energy currently working on the R&D, pre-production and testing components and prototypes. The complete vehicle is built in-house at the R&D center in Coimbatore and the designing is been done in Pune.

Gugu will manufacture 25,000 motorcycles each year

It is planning to open factories in Coimbatore and will manufacture 25,000 motorcycles each year which will increase more in number in the coming years.

Gugu will charge a subscription fee

Like Ather, Gugu will also charge the customers a subscription fee as per the electricity is consumed. The customers will get the charging grids fixed at their place by the Gugu retail stores and also will install fast chargers in other parts of the state. 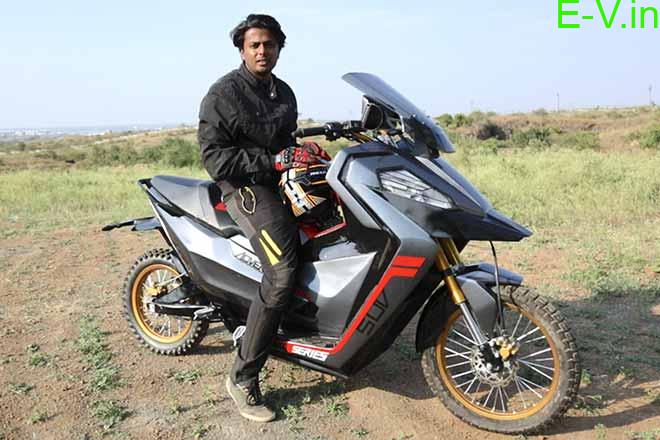 Pre-bookings for the R-SUV & Launch

The company has started pre-bookings on the website for the R-SUV. It claims that they have got more than 9,000 bookings as of now. But the EV will be in the market only by 2021.

If you are excited to know about the technical details of this SUV,  here are the complete details of R-series SUV Electric Motorcycle.