BYD Company Ltd the world’s leading electric bus manufacturer has announced that it has sold 68,018 battery-electric buses worldwide which helps to eliminate 114,947,040 tons of CO2 emissions, 1,836,432 cars worth of emissions, 80,160 tons of nitrogen oxide, 23,805,600 lbs of diesel particulate matter according to the transportation gov calculations. 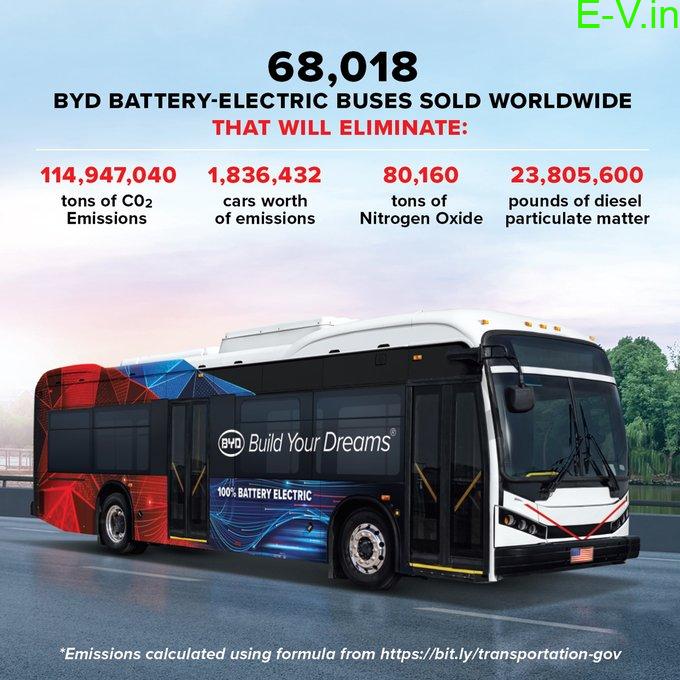 We can breath easier – these buses will prevent:

BYD and Levo announced their collaboration to integrate Nuvve’s leading vehicle-to-grid technology with a mix of BYD battery electric vehicles (“BEVs”) and plans for the joint deployment of up to 5,000 BEVs over the next five years. As part of the collaboration, BYD will implement Levo’s technology and capital to offer fully financed medium and heavy-duty BYD commercial EVs. BYD was expanding its footprint in the US with a fully electric school bus capable of bidirectional charging.

In August the BYD had announced that is planning to unveil an electric MPV (multipurpose vehicle) for the B2B segment from the fourth quarter of 2021. The unveiling of electric MPV comes as the company completes 8 years of EV business operations in India.

BYD electric buses in over 10 cities in India

Currently, the company’s electric buses operate in over 10 cities in India including Mumbai, Hyderabad, Pune, Kerala, and Manali.BYD was the first company to make the first pure electric bus in India.

In June this year, the BYD UK and Alexander Dennis Limited (ADL) jointly confirmed that their electric vehicle partnership, the UK’s leading electric bus producer, will deliver the UK’s largest-ever electric bus order. The order has been placed by RATP Dev London, one of Transport for London (TfL)’s principal bus operators, for a total of 195 single and double deck vehicles.

With this order, RATP Dev London confirms its commitment to supporting TfL’s electrification plan for London’s bus network, a key objective of the Mayor’s Transport Strategy for 2018, under which all TfL buses will be zero emissions by 2037, with all of London’s transport becoming emissions-free by 2037.